6 Things to do in Boston with Teens 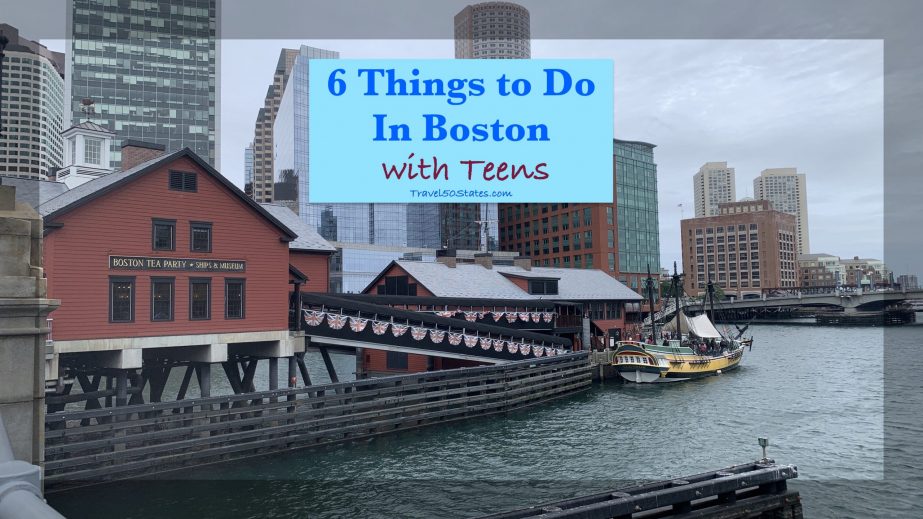 Boston is a city packed full of charm and history, and one I couldn’t wait to take my teens to visit. We based ourselves in Lexington for the duration of our stay and visited Boston as a day trip. Here are my 6 things to do in Boston with teens.

Driving in on a Sunday turned out to be a great way to avoid traffic, and we arrived mid morning to find parking central and easy. We parked in the underground garage at Boston Common. As we exited the garage, we began by wandering through the gorgeous Boston Public Garden. This garden is known for being the first Botanic garden in the United States. The lagoons, statues, and colorful bushes and flowers were fun to enjoy while getting views of the city and the buildings beyond.

Adjacent to the Public Gardens is Boston Common. This is Boston’s first public park and one of America’s oldest public parks, established in 1634. Within the Common, you can stroll among statues, a large pond, and a playground. From there you can also see the gold-domed Massachusetts State House. The Common’s rich history has been the site of celebrations, rallies, and protests alike from Revolutionary War times to Civil Rights events to modern day grievances and discussions.

My original plan when arriving in Boston was to join a walking tour of the Freedom Trail. As we made our way to the meeting place, we were a little too late to join the departing tour. We were going to catch the next tour, but we had already made a reservation for the Boston Tea Party Museum. I took my printed self guided walking tour to lead us around the area instead.

After leaving the Commons, we rounded the corner to the Granary Burying Ground. It is here where several famous people are buried, including Paul Revere, John Hancock, and Samuel Adams. Due to a recent hurricane, the weather was cooler than normal and extremely windy. We made it as far as the Cemetery before we decided that the weather was too uncomfortable for walking the Freedom Trail.

We ultimately visited the rest of the Freedom Trail from the Hop On Hop Off Bus Tour, described below.

Hop On Hop Off Bus Tour

We opted to purchase the Hop On Hop Off Old Town Trolley Tour to save some discomfort and get an audio history of the Freedom Trail instead. Unfortunately, we weren’t the only tourists with that idea, and lines to board the buses were long. We rode the bus straight to the Boston Tea Party Museum, where we had timed entry tickets. Later, we would return to the Bus and ride it around the full loop to capture the audio tour of all the sites and history along the route.

Hands down, our very favorite part of our Boston adventure was taking part in the Boston Tea Party Museum. My teens really enjoyed the re-creation of the evening of December 16, 1773 where “Samuel Adams” gives a stirring speech to the “rowdy” participants of the town hall meeting. Each tour guest receives a card that gives them an identity of one of the original meeting members. All the participants were encouraged to join in the excitement and emotion of the speech.

Then we were whisked off to tour a replica of the sailing ship that sits in the same harbor where the original Tea Party took place in 1773. Riled up passengers anxiously lined up to take a turn throwing the tea into the harbor. My family really got into it, as you can see below. This is the same spot where it all went down over 200 years ago.

The tour continued on with a museum presentation featuring 3D re-enactments and a film that further elaborated on the events leading up to the Boston Tea Party. We exited the Museum straight into Abigail’s Tea Room and Terrace and a huge gift shop.

Those are my recommended 6 things to do in Boston with teens. Check out more resources below.