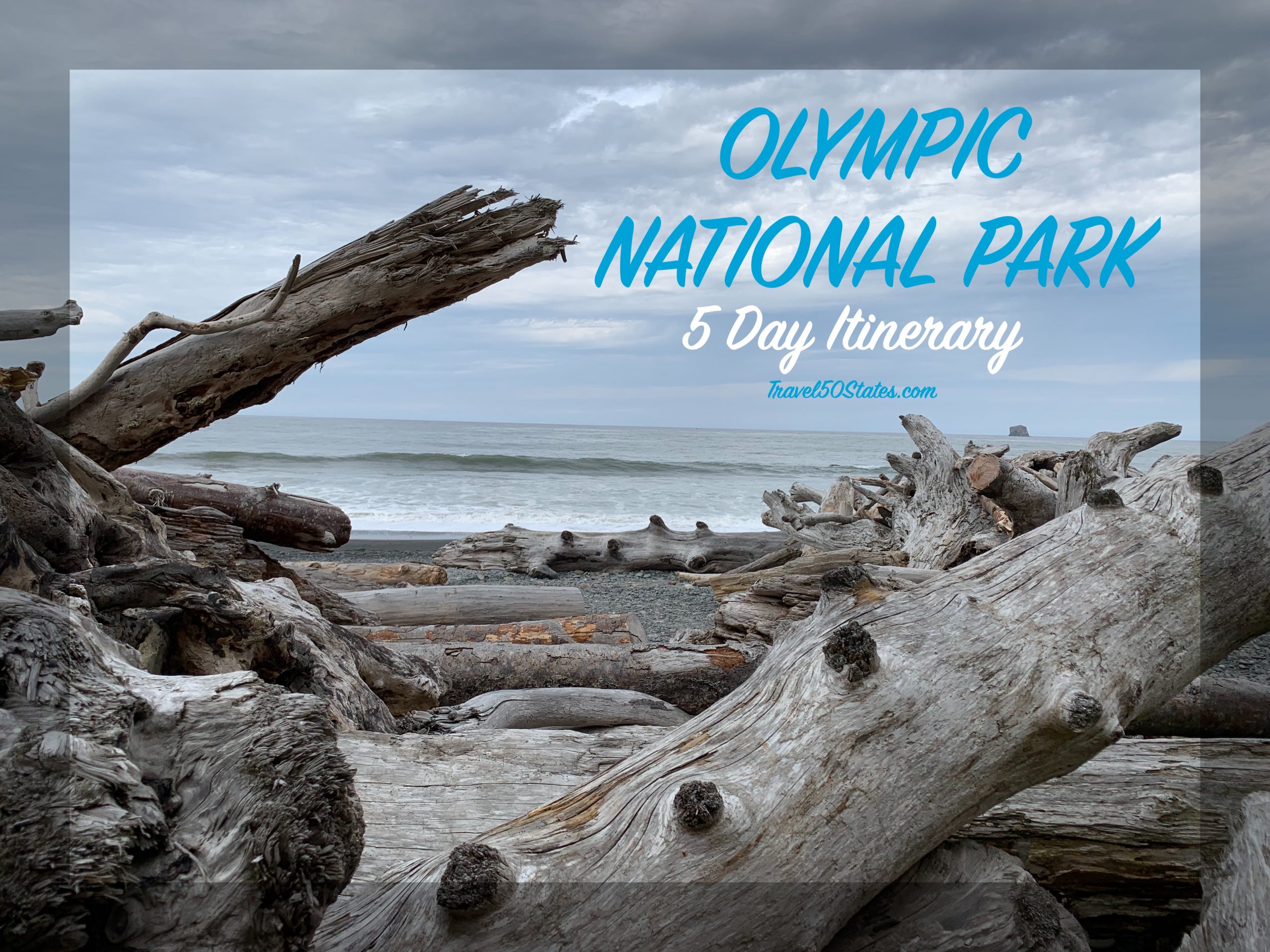 The Olympic Peninsula, located in Northwestern Washington, is an unforgettable adventure. In one relatively small area, you can visit mountains, ocean, and rain forest in Olympic National Park. Although we designated four full days, we had to carefully pick and choose our stops, in order to get a taste of it all. You can definitely consider the Olympic Peninsula a Pacific Northwest Paradise!

On Day 1, we drove from Boise, Idaho to Aberdeen, via Oregon. This was a beautiful drive through the mountains and along the Columbia River Gorge. We arrived at our first stop on the evening of Day 1.

Aberdeen’s other draw is the The Lady Washington, a replica of the original 18th century ship. It was used in the film Pirates of the Caribbean: The Curse of the Black Pearl. Tickets can be purchased online to sail on this unique ship. We did not have the opportunity to do this, but it looks like a fun experience!

We arrived in Aberdeen in the late evening, and stayed at the Best Western Plus Aberdeen before kicking off our Olympic Peninsula adventure.

On Day 2, we set off for Lake Quinault, approximately a one hour drive from Aberdeen. We chose two short trails to hike. We began on the Rain Forest Nature Trail, a short and breathtaking 0.9 mile hike among towering, lush trees. Despite the light rain, this early morning walk was our most peaceful and less populated of all hikes during our trip.

Next we ventured to the World’s Largest Sitka Spruce, an easy 0.4 mile walk, which was considerably more crowded. It was really unbelievable to climb over the roots of this massive tree!

Next we traveled about an hour to Ruby Beach, the perfect place for a picnic lunch. This was a hot spot! The parking lot was nearly full, but after climbing over piles of driftwood, there was plenty of room to spread out on the beach. There were some gorgeous sea stacks. The sand was virtually untouched as you moved further away from the crowds.

Our last stop of the day was the Hoh Rain Forest. We drove to the Visitor’s Center and made our way to the Spruce Nature Trail and Hall of Mosses Loop, a 2.9 mile hike that begins at the parking lot. Similar to Lake Quinault, the trees were breathtaking. It is hard to capture in photographs the varying greens and dizzying heights of the rainforest canopy.

We booked one night at the Manitou Lodge in Forks. I highly recommend this lovely, quaint Inn. The decor and atmosphere was charming and peaceful. You can take your pick from Lodging rooms, Cottages, Cabins, or Tent Camping.

After checking out from our Lodge, we drove straight to Rialto Beach. It was a cloudy, gray morning, but fortunately the beach was also eerily peaceful. We enjoyed the unique driftwood and tiny rock formations, and watching the waves crash violently to the shore.

Our route to Lake Crescent traveled right through the town of Forks. We had breakfast at a small restaurant. Twilight fans would appreciate visiting this old logging town, because there are movie references everywhere! (I found this great self guided tour for Twilight fans HERE.)

We spent the rest of our morning driving around gorgeous Lake Crescent. We hiked the Marymere Falls Trail, a 1.7 out and back trail, with towering trees, a very fun log bridge, and a small waterfall at the summit. This was another pleasant hike!

After Lake Crescent, we drove to Port Angeles, where we stayed 2 evenings at the Red Lion Hotel. We sauntered around town, had dinner, and relaxed in our hotel with water views!

The next morning, we drove up to Hurricane Ridge, 17 miles south of Port Angeles. The scenic drive climbed 5,000 feet and the views became more and more spectacular. We lucked out with relatively clear skies. The Visitor Center was quite busy, with guided tours, food options, a store, and a theater. There were multi-level decks surrounding the center to take in the views. We walked some of the trails and saw many deer, despite the crowds.

Although the afternoon was quite chilly, we boarded our boat for the Island Adventures Port Angeles Whale Watch Co. Tour. Initially, the water was quite rough. Nothing but fog surrounded us, and it left me uneasy. To avoid seasickness, we sat on the outer deck, and watched the boat plunge up and down each swell.

We eventually made our ways to calmer seas, and discovered both Orca and Humpback Whales! It was amazing to watch them leap and glide through the sea. The tour guides could actually identify the whales by name. The ride back to port was calm and clear, and it was interesting to see that land was in sight on both sides of us. It was quite a different and pleasant experience from the previous rough waters.

Day 5 found us making a few final stops, before heading to Seattle, for work commitments. We stopped at the overlook for Dungeness Spit, the world’s longest natural sand spit, at 6.8 miles long.

Next we drove through the beautiful Sequim, the Lavender Capital of North America. We marveled at the surroundings, and couldn’t resist a stop off at a Lavender Farm on our way. The owner was so kind, providing us a tour and showing us the products she has created from lavender.

Our final stop before heading to Seattle was the Harborside Fountain Park. After lunch, we walked down to the park, and were delighted to find these fun fountains behind the Naval Museum. We considered putting our car on the ferry in Bremerton, which would give us a shortcut to Seattle. However, we decided to carry on our drive around the bay.

This itinerary worked well for a four and a half day visit to the area. Had it not simply been convenient, we would have skipped Aberdeen entirely. If whale watching wasn’t my priority, we would have visited either Neah Bay or Port Townsend with the extra time. Nevertheless, we felt like we got a little bit of everything on this trip! The Olympic Peninsula is truly like paradise!