A Driving Tour of Hollywood & LA 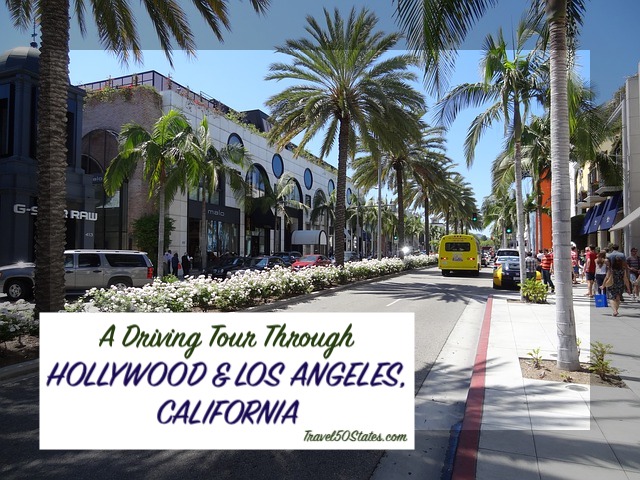 The idea of driving through LA, with its well known reputation for traffic jams, did have me a little bit nervous.  Perhaps it was the fact that we went on a Saturday, but I found navigating Los Angeles to be no big deal at all.

Before our excursion, the boys and I had been reading and re-reading a very cute book about L.A. called Larry Gets Lost in Los Angeles, by Michael Mullin & John Skewers.  A little dog named Larry, gets separated from his owner, passing popular sites along his journey until he is reunited with him.  Before we even arrived in LA, the boys picked the sites from the book that they most wanted to see. We tried to incorporate several places from the book into our tour.

Beginning our tour along Hollywood Boulevard, we found very close and inexpensive parking along the Hollywood Walk of Fame.  Coincidentally, half of the street was closed down in preparation for the Oscars, so it was very crowded.  We walked across to the Chinese Theater, and up to the third floor of the shopping square. This level had a nice picture-taking opportunity of the Hollywood sign.  My oldest son stopped to take pictures of the Stars of Bugs Bunny, Mickey Mouse, and Donald Duck.  I found my favorite band.  My husband found his namesake.

Then we drove down Hollywood Boulevard and passed by the Capitol Records building.  We made our way towards the Museum Center, ogling the beautiful homes along the way. We marveled at the highest concentration of expensive cars in one city that we had ever seen.

Our next stop was the George C. Page Museum, featuring the La Brea Tar Pits.  We were able to walk through the park to see one of the large tar pits, without actually going into the museum.

As we began walking to the Tar Pits, our kids decided to forego the educational activity. The hill beckoned, and the boys proceeded to roll and somersault down repeatedly. When we grew tired of waiting, we dragged them away to see the Tar Pits.

These Tar Pits, located in central Los Angeles, house the largest collection of ice age fossils collected anywhere in the world.  Asphalt has seeped to the earth’s surface from an underlying oil field for thousands of years, making it a death trap for ice age mammals and birds.  Over 100 tons of fossils bones have been collected here.

Next we drove to Beverly Hills. We could not resist the opportunity to get out and walk up and down Rodeo Drive, gawking at the well dressed shoppers and outrageous cars.  Then, we walked to a nearby park and admired the massive trees and houses.  Every single house looked different, no cookie cutter neighborhood here!

In the morning we headed to the beach walk along Venice Beach, home of the outdoor Golds Gym, the main attraction that my boys chose to see.  They were anxious to see the weight lifters working out on the beach.  As we were forewarned, it was full of interesting characters.  There weren’t too many people working out when we arrived, but we greatly enjoyed the skater park, which was full.

The boys had to flex their muscles in front of Gold’s Gym:

On our way back out of town, we passed by the Santa Monica Pier, smaller in person than it looked in the books, but a very pretty area. It appeared much cleaner and prettier than Venice beach.  If we had the energy, we would have wanted to spend some time walking the Santa Monica area as well.  Maybe next time.

8 THINGS TO DO IN PISMO BEACH, CA WITH KIDS
FAQ’s about Full Time Travel: Taking the Leap