One Day in Seattle, Washington with Kids 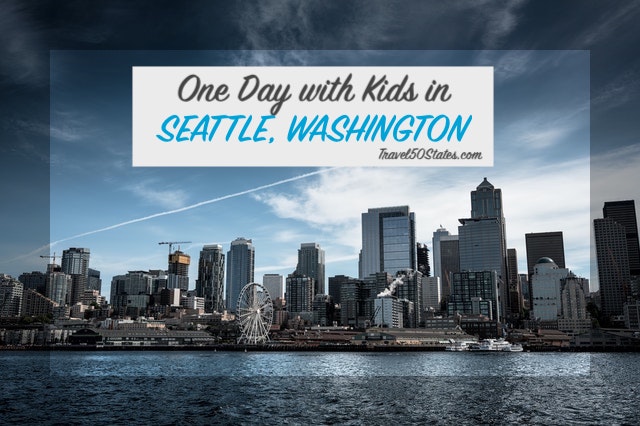 We left behind the RV, and drove to Seattle to embark on a 7 day cruise to Alaska.  Our ship was leaving on Sunday, so we spent Saturday exploring the area.  There were several things on our bucket list to do and see here, but we chose a few, with the hopes to return in the future to see the rest of the city.

We began with a Ride the Ducks Tour of Seattle.  Although the Underground Seattle tour was highly recommended by family, we went for a more kid-friendly tour this time around. (We later returned to Seattle to take the Underground Tour!)

The boys got duck “quackers” for the ride.

This tour gave us a nice overview of the city, pointing out the local sights and cruising out to Lake Union, sight of houseboats and floating houses, including the famous home used to film “Sleepless in Seattle.”  These floating homes are BIG money.  Fascinating way to live.

We also drove past Pike Place Market, the first Starbucks, the Needle, and Pioneer Square, and got an entertaining dialogue from our tour guide about each attraction.

After the tour, we ventured to Pike Place Market on our own, which was packed.  It was interesting to see all the lovely flowers, crafts, and of course, the fish market. Across the street we passed the original Starbucks, which had a line out the door.

Another favorite spot for the kids was a playground in the middle of downtown called Westlake Park, with a unique climbing structure.  There was a busy, life-size chess board here as well, which was entertaining to watch.

We took a drive passed the Microsoft Campus while we were here, but wouldn’t get to visit it until a later visit to Seattle. Nevertheless, we hopped out of the car for a few pictures. Boeing also looked really cool from the road, but we did not have time to tour this time around.

The northern suburb of Seattle, Edmonds, was our next stop, where we enjoyed the Bay views.  The boys wondered if this was the size of our cruise ship we would be taking to Alaska.  They thought this was a large ship!

There were some fun murals painted on the side of the downtown buildings.

We also stopped at Rick Steve’s Travel Store, being that I’m a big fan of his travel guidebooks. Many of his books were a great resource when we were in Europe ten years earlier.  It was fun to be in his store, which also has a great collection of reference books and maps, as well as travel classes.

There were many, many other attractions that we didn’t get a chance to see this time around, but we enjoyed our short time in Seattle.