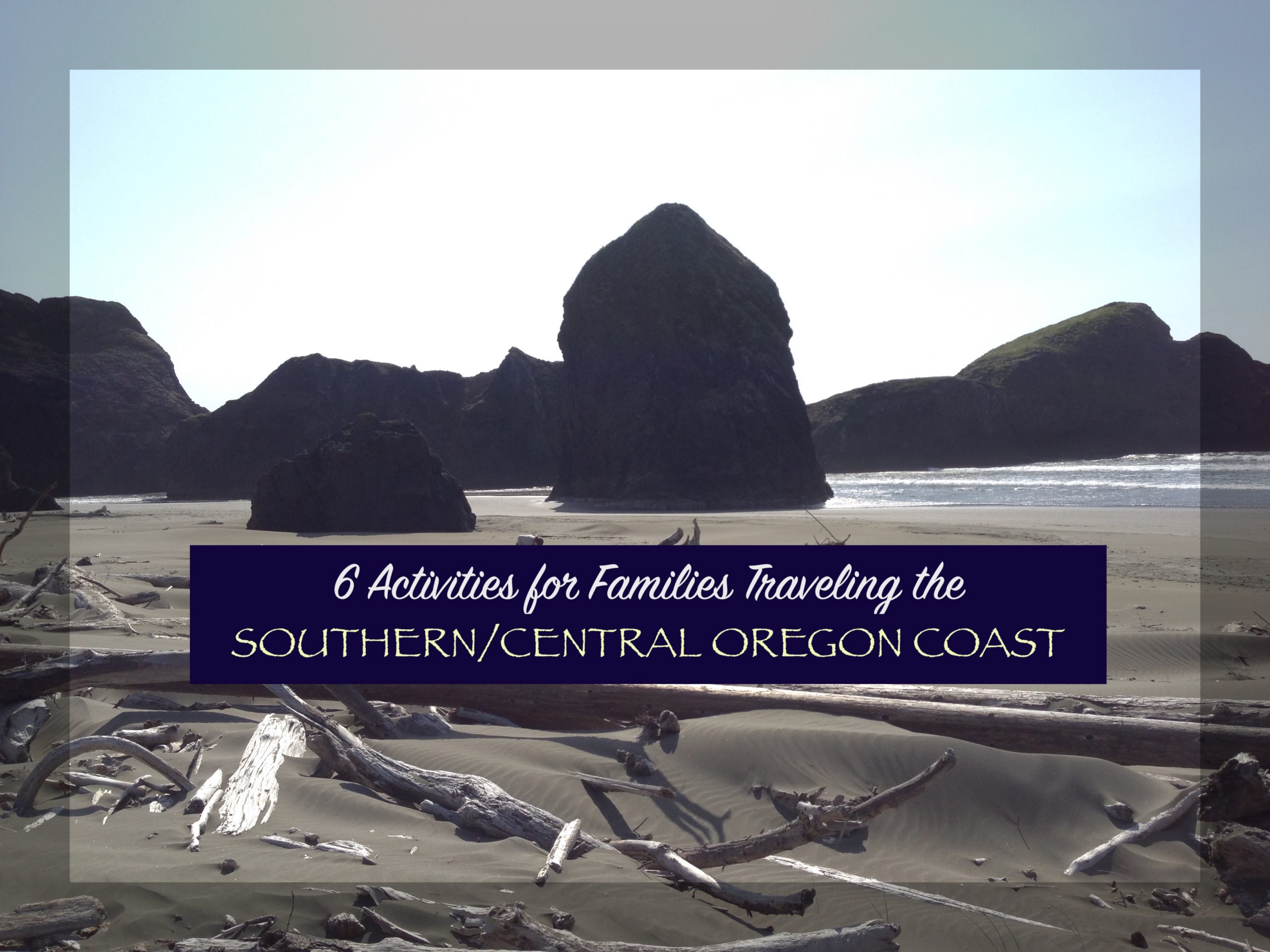 The southern Oregon coast was every bit as breathtaking as they say it is.  But the weather can be cool, and even downright cold and windy, hovering in the 50’s and 60’s in late spring. Here are 6 amazing ways to spend your family trip along the southern and Central Oregon Coast!

We spent several of our beach visits bundled up in jackets, hats and gloves.  The water was rough, and sneaker wave warnings were everywhere, making us hesitant to walk too close to the water with our kids.  The beaches were filled with beautiful large rocks and piles and piles of driftwood.  But the views were amazing.

We stayed at a nice oceanfront campground in Gold’s Beach called Turtle Rock Resort, and we we only had to walk underneath the Highway 101 bridge to get directly onto the beach.  Again, it was windy and cold, but a nice location nonetheless.  The boys enjoyed this checker’s board game:

We found another nice campground, Osprey Point RV Park, a little further north in Lakeside, and spent a few nights in order to explore the Reedsport area.

We started at the National Dunes Recreation Area Visitor’s Center in Reedsport to gather information about what to do in the area.

The boys and I then ventured to the Umpqua Discovery Center, a cute little museum with a walk through replica of the outdoors, complete with plants, animals, sounds, and even a cave with a slide that leads to a black bear exhibit.   The boys enjoyed viewing the outdoors through a 35 foot periscope and the weather station and sand patterns.

The museum was located right on the river.

Another afternoon we ventured to the Deer Creek Elk Viewing platform, also located in Reedsport, which had a lot of facts about elk.  Unfortunately, there was not one elk to view in that location.  However, we drove further down the road, and did find a small herd of elk grazing way in the distance.
We later took a short scenic drive to the Umpqua Lighthouse, and enjoyed views overlooking Winchester Bay.  Another day, we hiked the John Dellenback Dunes Trail in Lakeside, which led to the sand dunes and beach.

In Florence, we treated ourselves to a Giant Dune Buggy Tour at the Oregon Dunes National Recreation Area.  If you ever take a tour on the dunes, make sure to wear hats, sunglasses, and bring warm coats.  It was extremely windy.  The tour guide gave us a lot of information about the area, as well as a few thrill rides down some larger dunes.  As we drove along the ocean, we spotted seals in the water, and later we saw some deer along the dunes trails.

I was surprised to learn that there are black bears in this area. Since we had been exploring the dunes with virtually no other people in sight over several days the previous week, I was relieved that we hadn’t run into any.  This was a great introductory tour of the dunes, and when the boys are older, I hope to return to ride ATVs through the dunes.

This hill was our biggest thrill and steepest drop, and our humongous dune buggy left deep grooves where we went down!

Another favorite stop along the Central Coast was to the Sea Lion Caves in Florence, home of the Stellar Sea Lions.  This is a privately owned wildlife sanctuary, where the sea lions have been coming and going for decades.  The sea lions occupy the cave during the winter months and move to the rock ledges in the springtime.  The owners built an elevator that descends a little over 200 feet into the underground cave, allowing visitors to view the sea lions in their natural environment from a safe distance.  Although we were told ahead of time that there were no sea lions in the cave, we went anyway.  We found it to be a really cool experience.

All of the sea lions were outside, lying on the cliff side.  We had to use binoculars for the best views.

Here is the empty cave where the water crashes in through the openings:

And another view from the cave of the Heceta Head Lighthouse in the distance:

This is also a great location to watch for whales.

This was our lucky day, because we did happen to see some migrating gray whales from the Sea Lion Caves outdoor platform, at least one large whale and one baby, which were swimming close enough to the shore for us to get a great view!  We were so excited, but it was hard to snap a picture because they were so fast!  Jacob got the best picture out of all of us and he was very proud:

We spent Mother’s Day exploring the Tide Pools in Cape Perpetua.  This may be the loveliest area of the entire Oregon Coast, but it’s so hard to choose just one!  As always, we started at the Visitor Center to get the best tips, and took the path directly behind the visitor center, right to the beach.

We also stopped at the Cape Perpetua Overlook, which was covered in fog by the time we arrived at the top.

So we stopped back there on a clearer day.

This is said to be the highest point along the Oregon Coast, and it was worth the twisty, steep drive to the top.  Just make sure your brakes work well, because you will ride them the entire drive back down!