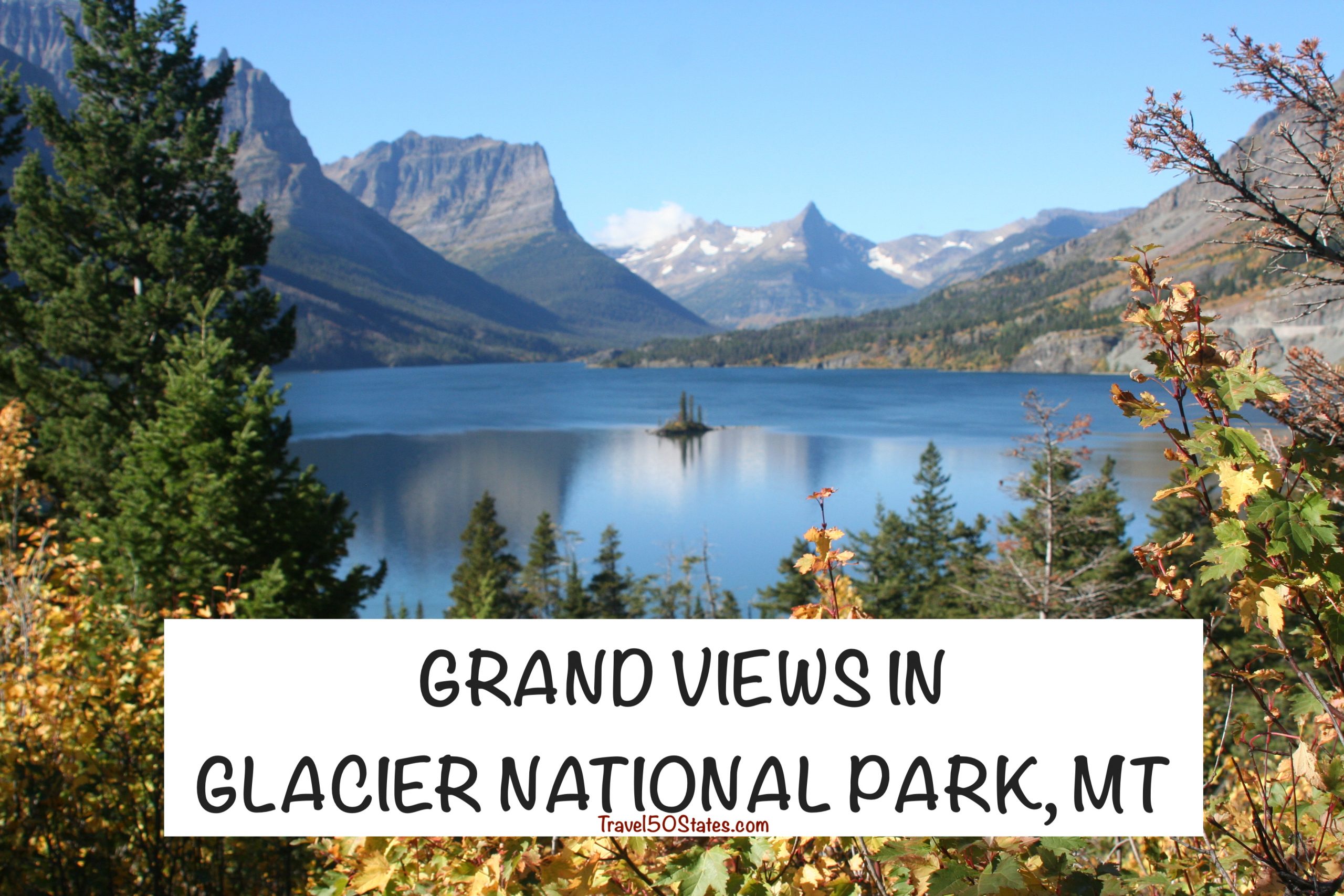 Glacier National Park was breathtaking.  We stayed on the east side of Glacier in the town of St. Mary. This location was a great jumping off point for the Going to the Sun Road.  We were just minutes from the east entrance and Visitor’s Center while staying at the KOA.  Because we arrived late in the season, we missed the park shuttle and boat ride tours.

So, we chose to take the Red Bus Tour, the bus referred to as a Jammer. Our tour guide picked us up right at our campground.  The weather was perfect, so she was able to roll back the top of the tour bus. Spectacular views greeted us on the Going to the Sun Road. The open top allowed us to stand up for 360 degree views.

We had totally lucked out. The previous week they had gotten several inches of snow, which had now melted. Because of this, the leaves started turning colors several weeks early!  The colorful trees surrounding the bright blue water were so gorgeous.  We were happy to let the driver navigate the tight and twisted roads while we marveled at the scenery.

There were not many glaciers to actually see. They have been disappearing over the last several decades, due to the climate changes.

The tour went as far as Logan’s Pass before turning around.  Upon arrival, we got out for a short time, had lunch, and took a short walk to admire the views.  I hope to return to Logan’s Pass on a future visit. The trail directly behind the Logan’s Pass Visitor Center is known for its beautiful wildflowers.

After the 4 hour tour, we drove to another part of the park, called Many Glacier. We heard that bear activity had been detected in the area.  We were a little leery about going on a hike with all the bear sightings and “scat” in the area, so we skipped the hike.

However, we did see about 7 bears from the safety of our car, but they were teeny tiny dots up on the mountainside.  We did make out a mother bear and her two cubs moving around behind the trees.  Binoculars would have been very helpful on this trip!

We also attended a night time program at the St Mary’s Visitor Center. Luckily we were able to view the stars and solar flares coming from the sun, through some very fancy telescopes.  Our eight year old was the youngest one there, but he did enjoy the program. He especially enjoyed climbing up the ladder to look through the largest telescope I have ever seen.

We hope to return to Glacier National Park to experience it from the westand the Canadian side next time.