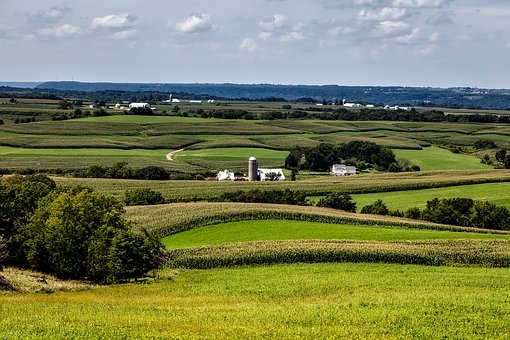 We left our campsite at Woodhaven Lakes in Sublette, Illinois, after just purchasing our Class A Motorhome a few weeks prior.  With very little driving experience of this 40 foot beast, we set out for the very first time to the Amana Colonies in Iowa.  My husband took it all in stride, but I sat in the front seat terrified, listening to every single new noise. The stress was overwhelming and I wondered if I could survive riding a mere few hours to our first destination.

Athough I had a route planned out for our first few months, we made some last minute changes due to heavy construction along our original route.  We decided to head straight west instead, and Amana Colonies seemed like an ideal place to stop.  It was only a few hours drive, plenty far for our first drive and overnight in the RV.

I called ahead to see if the campground had availability, which they did. I tried to memorize all of the important information that I’d need in order to make a reservation, such as RV length, amps required, hook ups, etc.

Amana RV Park was several miles off the expressway, which gave us more practice navigating two lane roads with narrow shoulders. Luckily, this campground had huge spots and was uncrowded, giving us plenty of space to maneuver and set up just before dark.  This was just the kind of campground we needed for our first trip ever driving and setting up an RV!

We started at the Visitor’s Center the next morning. Next we walked to the old Clock Shop, which had some very fun, interactive clocks.  Inside the building was also a furniture store and factory, where you could watch the wooden furniture being made.

Then we made our way to the Amana Woolen Mill.  Unfortunately no one was working at the time. But there was a video that gave the history of the factory. There were also some very beautiful blankets, sweaters, scarves, and such for sale.

There was also a Copper Factory and Store.  Our timing was apparently off. This factory was also closed when we arrived, but we enjoyed perusing the store.

The woman at the Visitor’s Center suggested that the kids might enjoy the Barnyard Miniature Museum in South Amana. This was a great suggestion, because we all enjoyed it! The Museum was run by the son of the man who built all the miniatures. The exhibits depicted life in Iowa from the time of the Dinosaurs to the present.  The collection was so extensive and the attention to detail was incredible.

If we had planned this first stop ahead of time, I would have made sure we visited when all the factories and tours were open. Being able to see the furniture and copper makers would have been really interesting.  Two to three days seemed like a perfect amount of time to spend in the area.

For more information about the area, click here: About Amana Colonies